Motorcycle accidents are a common occurrence not just in Chicago, but across the nation. 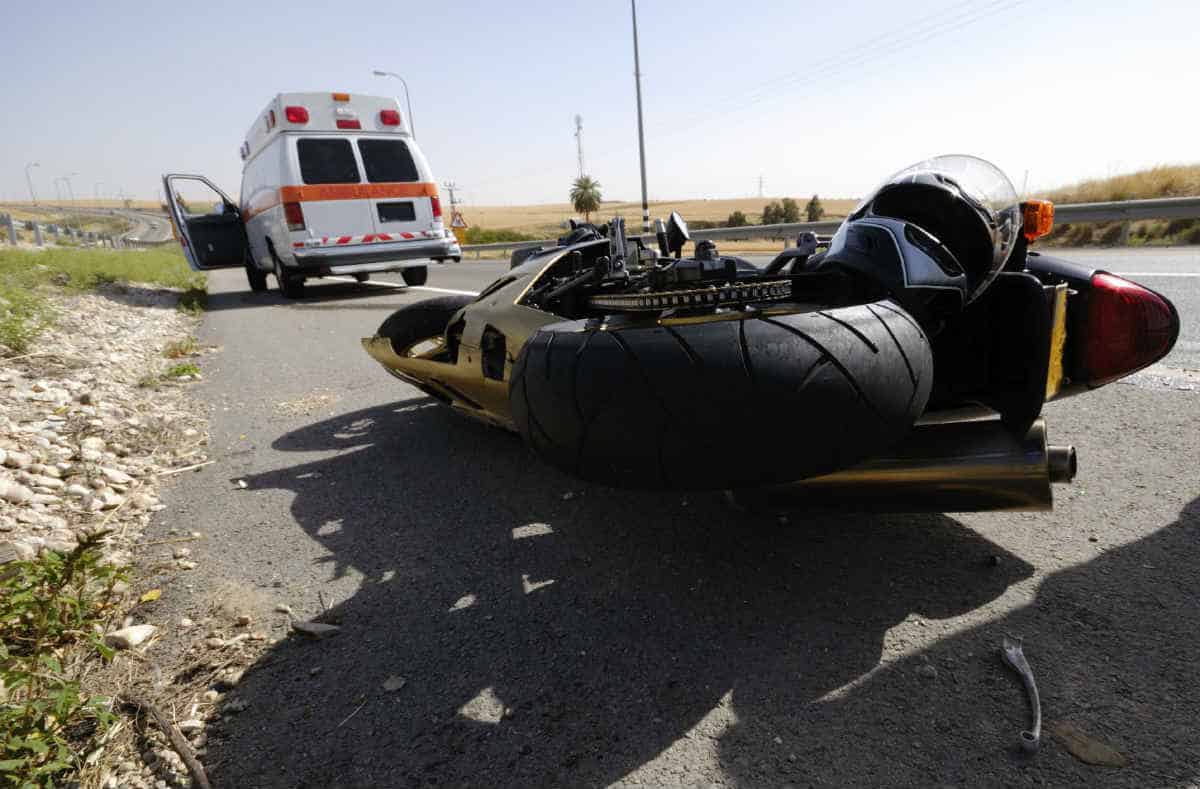 Unfortunately, motorcycle accidents often lead to serious and even fatal injuries, because the rider has little or no protection against the impact. So, it is important to understand the key causes of motorcycle accidents, and try to work on them to make roads safer for everyone:

Drivers often fail to notice motorcycles rising close to them. Sometimes, the drivers completely fail to see the motorcycle and when they do it is too late to react. Some common driver errors include distracted driving, driver inexperience, driver fatigue, reflex delay in elderly and handicapped drivers, road rage, and intoxication.

Some traffic violations that lead to motorcycle accident include failure to yield right of way, speeding, improper lane changes, and failure to follow traffic signal.

Motorcycle accident injuries can generally be categorized into hard and soft injuries.

Some common hard injuries that motorcyclists suffer include:

Motorcyclists can suffer second and third degree burns from exhaust, engine, and manifold. Motorcycle engines are often fully exposed and have an average temperature of around 230 degrees. In event of a crash, the motorcyclist can fall off the bike and come in contact with the engine. This can cause second or third degree burns because there is no protective layer between the engine and the rider’s skin.

Fractures are probably the most common motorcycle accident injury, and the most vulnerable bones are that in the pelvis and wrists. This happens because the driver tries to save his/her face with hands and in the process the whole impact comes in the hands or wrists. By doing so, the driver also exposes his lower extremities exposed and can suffer a fracture in hips or pelvis.

Serious motorcycle accidents can also cause severe injuries that damage the rider’s internal organs. The force of the impact with the ground or with a solid object even at low speeds can cause significant damage. It can cause serious injuries such as traumatic brain injuries, collapsed lungs and internal bleeding.

When the motorcyclist falls off the bike, he may get dragged along the pavement. His limbs or piece of clothing can get caught in the motorcycle causing road rash or road burn.

It is common for motorcyclists to suffer sprains in an accident. Torn ligaments and tendons are also commonly reported in motorcycle accidents. When the motorcycle crashes, the rider makes every effort to stop it from falling to the ground or getting trapped under it. In the process, the tendons, muscles and ligaments can get twisted and torn.

Contrary to the common belief, whiplash is not only suffered by car accident victims. Even a motorcycle accident can cause the rider’s neck and back to snap violently.

This is the most common and the less severe injury that a motorcyclist may suffer. Protective clothing can prevent road rash to some extent, but getting thrown off may cause severe burns, lacerations, and abrasions.

A collision with another vehicle can throw off a rider from the motorcycle, causing serious head trauma, especially if the rider is not wearing a proper helmet. A serious blow to the head can cause a traumatic brain injury, which can lead to intracerebral haemorrhage or brain swelling. It is important to know that even a minor head injury can lead to a brain injury. If a person suffers a brain injury in a motorcycle accident, he or she may experience the following symptoms:

Spinal injuries are one of the most devastating types of injuries suffered in a motorcycle accident. Getting thrown off a motorcycle or colliding with another heavy vehicle can cause serious damage to the spine and lead to partial or total paralysis. Even a minor injury to the spine can cause long-term problems and the patient may require long-term treatment and physical therapy.

Bring thrown off a bike or a collision can cause a fracture. Wearing protective clothing such as leather clothing and gloves may prevent fractures. Not wearing a full face helmet can lead to facial fractures as well.

Failure of a motorcycle rider to wear protective clothing and gear such as leather jacket, pants, boots, gloves, and of course, a helmet increases the risk of permanent scarring and disfigurement from contacting the pavement or roadway or from lacerations. A crush accident can even lead to loss of limbs.

The motorcyclist who fails to wear a helmet while riding a motorcycle can suffer a skull fracture if the head hits the road or another vehicle with force. Although skull fractures do not normally warrant extensive medical treatment, in severe cases it can lead to brain damage. A skull fracture in itself is not a life threatening condition, but the fracture can cause damage to veins and arteries, leading to further complications.

Head injuries can have a devastating effect, because it often causes damage to the brain, and unlike other organs in the body, the brain cannot heal on its own. As a result, a motorcyclist who suffers head or traumatic brain injuries in an accident is likely to require extensive and prolonged medical treatment. The victim may have to spend a long period of time in hospitals and rehabilitation centers. The patient may incur expensive bills for medical treatment, physical therapy, and rehabilitation. The financial situation is worsened by the patient’s inability to return to work.

This is among the most serious types of injuries motorcyclists can suffer, and it is important to seek immediate medical help.

Our Chicago motorcycle accident lawyer explains that femur fractures are not common. They occur at a rate of just one case per 10,000 population annually. In people younger than 25 years and older than 65 years, the incidence increases to 3 cases per 10,000 population annually. These injuries are more common among young males, and the incidence increases in elderly patients.

The femur is the longest bone in our body, and its proximal end, known as the femoral head is connected to the pelvic bones. Its distal end forms the knee joint along with the tibia and fibula bones in the lower leg.

Femur fractures can be of various types depending on its location and severity. Some of the most common symptoms of a femur fracture can be felt in the area of the fracture in the thigh. If accompanied by a multi-system injury or severe blood loss, it can be life threatening. Common symptoms include:

If the femur fracture is life threatening, there will likely be additional signs and symptoms including:

There are three types of femur fractures that can result from motorcycle crashes. These include:

Femoral shaft fracture: It is the most common type of femur fracture that results from high speed collisions, because the femoral shaft is the longest portion of the thighbone. When this fracture occurs, doctors insert a metal rod into the thighbone to secure ends of the bone together. It is considered a severe injury.

Proximal femur fracture: Also known as femoral neck fracture, it affects the highest portion of the thighbone adjacent to the hip joint. Treatment includes the use of surgical hardware such as plates and screws, and in some cases a hip arthroplasty.

Supracondylar femur fracture: This occurs just above the knee joint, and usually involves a cartilage injury to the knee as well. It is a rare form of femur fracture, and often occurs in people who have severe osteoporosis or have had a total knee replacement. Treatment involves the use of plates, screws, cast, brace, external fixator or intramedullary rod.

A herniated disc is commonly referred to as a slipped disc. Spinal discs are made of supple pads that fill in the gap between the bones in the spinal column or vertebrae. A slipped disc happens when the inner material of the spinal disc swells, causing pressure on the outer membrane and the spinal cord.

What is a Slipped Disc?

Various medical terms refer to the condition of a slipped disc, such as:

Shock Absorbers in the Spine

The outer membrane of the spinal disc consists of several bunches of connective tissues made up of sturdy, expandable fiber-like materials. This annulus fibrosus helps detain the supple and elastic nucleus inside the disc. The underlying layers of the spinal disc help keep the hyaline cartilage plates on the vertebrae from rubbing against each other.

The spinal discs consist of fluid filled tissues made of fiber like materials and connected to each other. The fluent content helps make the spinal disc elastic and sock absorbing. Unfortunately, the percentage of fluid content in the disc reduces as we age. This means that the soft materials inside the disc start to harden as we age. As a result, adults or elderly persons have less elastic and weaker spinal disks more susceptible to injuries from a car accident.

How the Spinal Discs React to Stress

If you suffer an injury in the spinal disc from a motorcycle accident, the soft underlying materials of the disc may swell, putting pressure on the spinal canal. If your underlying tissues are strong and healthy, the disc should be able to come back to its normal position after a temporary distortion. However, if that does not happen, then you may suffer serious injury to the disc.

Living with Disfigurement After a Motorcycle Accident in Illinois

Insurance companies and courts often do not look beyond the physical pain and suffering associated with a disfigurement, but the emotional impact is often life-altering. Any disfigurement may lower your confidence level and may severely affect your behavior patterns and emotional state. If you suffer disfigurement from a motorcycle accident, you may need to cope with mistrust and intolerance. You may feel isolated and may often have to deal with aggressive comments or abuse from strangers.

Treatment options may vary depending of the location and severity of a disfigurement. Common treatment methods include skin grafts and plastic surgery. Some patients may require undergoing pain management programs, physical therapy, and emotional therapy.

Internal Injuries from a Motorcycle Accident

There are several ways in which a motorcyclist may suffer internal injuries.

Penetrating trauma: Occurs when a sharp object breaks the skin and penetrates the body, damaging the organs.

In a motorcycle accident, internal bleeding may be a result of blunt force or penetrating trauma. Sudden deceleration of the body when it hits a hard surface such as a pavement, wall, or car can also cause internal organ damage and internal bleeding.

A motorcyclist can suffer internal injuries even if the crash was seemingly minor. If the motorcyclist experiences any of the listed symptoms after a crash, he or she should seek immediate medical attention. Any delay in treatment of injuries can prove fatal.

Motorcycle injuries can be debilitating requiring extensive treatment and care. It is important to get adequate compensation for the injuries. If you have been injured in an Illinois motorcycle accident , contact an experienced Chicago personal injury attorney at Willens & Baez to ensure that your legal rights, including your right to compensation, are protected.