The Effects of Speed in a Car Accident

The speed a driver is traveling contributes both to the risk of a car accident occurring and to the severity of that accident. 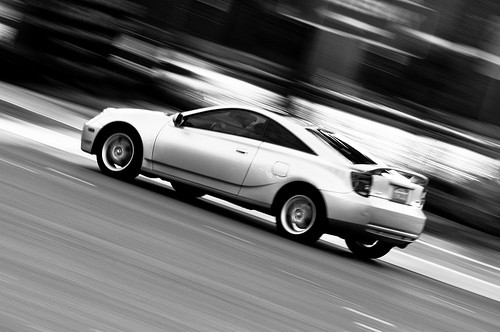 However, speed is also associated with increased severity of car accidents. The main factor in car accidents is how much a vehicle’s speed changes at the time of the accident. If the car’s speed changes only 1-10 mph, there is only a 4.5% risk of injury and only a 1% risk of serious injury. However, with a change of 50 mph, there is a 69% risk of injury, and a 52% risk of serious injury.

Fatality risk also increases with speed changes. At about 70mph speed change in a crash, the fatality rate approaches 100%.

Do Slow-Traveling Cars Cause Accidents?

Early research on speed and accidents showed a U-shaped crash curve, with vehicles both below and above the average speed having increased accident risk. However, further research has shown that the increased risk of slow-traveling vehicles is relatively minor, and that the highest risk occurs to vehicles that are traveling 15 mph more than the median speed.

Remote cameras have been installed at intersections to catch drivers who speed or drive recklessly.

Each year, speeding and reckless driving causes serious car accidents, severe injuries, and even death. In an attempt to reduce speeding in Chicago, remote cameras have been installed in various intersections to monitor offenders and issue tickets.

These traffic tickets are called Automated Speed Enforcement Violations and are issued to an offender via mail. The system uses a 3D tracking radar that calculates the speed of vehicles as the pass through the intersection. A video camera takes images and videos of the car and its license plate number. This data is used to issue traffic tickets to offenders.

The public has shown annoyance and frustration with the system. An investigative report generated by the Chicago Tribune revealed that cameras have issued about 2.4 million incorrect citations. The concern is that the tickets were issued even when the cameras were known to be inactive or when there was confusion regarding enforcement zone signs. The public is outraged against the incorrect issuing of tickets and has been questioning if the cameras were placed there for generating revenue for the state.

Even though the public debates over the effectiveness of the ticketing system, data reveals unexpected outcomes. The Insurance Institute for Highway Safety (IIHS) conducted a study on a community near Washington D.C. In 2007, the community installed 56 fixed cameras, 30 portable cameras, and 6 mobile speed vans in residential areas, on roads that had speed limits of 35 mph, and in areas with schools and parks.

The study revealed a decrease in speeding by 59% and a 19% reduction in the possibility of intersection accidents leading to fatalities or disabling injuries. The key reason for the reduced speeding is that motorists consciously reduce their driving speeds to avoid getting a speeding ticket. This in turn leads to a reduction in car accidents. The accidents that do take place are not as severe and thus a reduction in fatalities and serious injuries. The data suggests that if these cameras are used nationwide, approximately 21,000 disabling injuries and fatalities per year can be eliminated.

Do Higher Speed Limits Cause an Increase in Car Accident Fatalities?

It can be difficult to remember a time when speed limits were lower on the crowded roads and freeways of Chicago. Prior to the early 1970s, posted speed limits were as high as 75 miles per hour in many states.

The National Maximum Speed Limit was in response to the 1973 oil crisis and the initial goal was to conserve gasoline. In addition, researchers began reporting a decrease in fatal automotive accidents. More than half of all vehicular accidents can be at least partially credited to someone driving at an excessive speed, often leading to severe injuries or death of drivers and passengers.

The Insurance Institute for Highway Safety states that more than 30,000 deaths from auto accidents have been linked to higher speed limits. The study featured records from more than 40 states – excluding the states and the nation’s capital for not having enough annual miles to give an accurate rating.

While overall fatalities decreased over the past 20 years, the number of vehicle deaths from speed-related accidents have increased. Other factors that were considered included the time these fatal accidents happened, the number of younger drivers entering the roadways, an increased unemployment rate, and how much alcohol was consumed in these states.

These numbers were then compared to the number of deaths that would have likely occurred without the increased speed limits during that timeframe. After making the necessary comparisons, it was found that there was about a four percent increase for every five miles per hour added in the maximum speed limit on regular roadways. That increase in fatality risk was doubled to eight percent for every five miles per hour added to the maximum.

Most car accidents that occur in Chicago during traffic are at relatively low speeds. This increases during the winter when ice makes it hard to stop at even low speeds.

Even so-called low-speed collisions strain the body beyond the range of force that it’s designed to withstand.

A low-speed collision that results in a velocity change of about 6 mph can subject your body to nearly 3 g’s of acceleration. That’s three times the normal force of gravity—and from a direction that your body is not designed to withstand it. A velocity change of 10 mph is the equivalent of an 8-foot fall, such as off a low roof. While it’s certainly possible to avoid injury in that situation, it’s also possible to suffer potentially serious injuries.

If you are wearing your seat belt during a low-speed car accident, you should not strike anything in the passenger compartment, so you should avoid broken bones (although some people suffer cracked ribs from seat belts). Instead, the most likely injuries you will suffer include:

These injuries may take several days to manifest themselves, but when they occur they can have long-lasting repercussions.

Your Risk of Injury in a Low-Speed Car Accident

A person’s individual risk for injuries in low-speed car accidents is highly variable, depending on your age, weight, height, gender, physical fitness, and posture when driving.

If you suffered an injury in a low-speed collision, we can check to see whether a vehicle defect may be partly responsible.