EMT for Care 1 Ambulance based in Arlington Heights, has been charged with several crimes based on his alleged blood alcohol content of .271 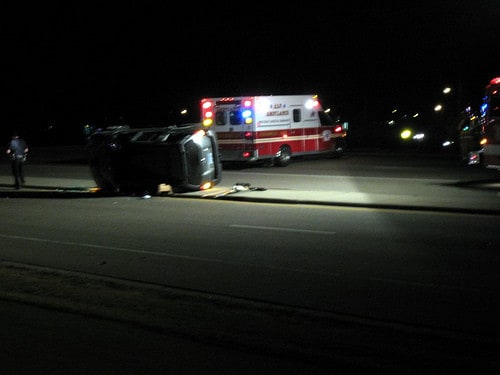 The Chicago Tribune reports that a driver for a private ambulance company, was intoxicated when he ran a red light in his ambulance and T-boned an oncoming pick-up truck. John Lara, a driver and Emergency Medical Technician (EMT) for Care 1 Ambulance based in Arlington Heights, has been charged with several crimes based on his alleged blood alcohol content of .271, over three times the legal limit. The driver of the pick-up received treatment at the scene.

When drivers cause accidents, the most important parts of these cases are to establish who is at fault with the accident, and to ascertain the amount of damages the injured party deserves. When otherwise qualified EMTs cause accidents, other considerations arise. Amongst these are qualified immunity and vicarious liability.

If a driver negligently causes a car accident that results in injury to another, that driver is likely liable for the injury. However, there are circumstances in which drivers can escape liability for the injuries caused. One of these is qualified immunity.

The law will grant certain classes of people immunity from civil liability for public policy and public safety reasons. One such class of people is EMTs. Under Illinois law, EMTs are immune from liability for injuries caused in the course of their duties. The purpose is to allow the EMTs to make decisions informed by their education and experience, without the worry of being second-guessed after the fact with a lawsuit.

However, EMTs will only be immune from liability if their actions were not willful or wanton. EMTs must act reasonably, just like everyone else. If they act with egregious negligence, they will be held liable for injuries caused. Driving while severely intoxicated is likely an example of willful and wanton conduct that will cause an EMT to lose their qualified immunity.

If an employee negligently causes injury in the course of their duties, he is likely liable for the injury. However, the employer can also be held liable for the injury. The doctrine is called vicarious liability, and it is based on the idea that the actions of the employee can be considered the actions of the employer. In the instant case, Lara claimed to be rushing to Illinois Masonic to pick up a patient. If a plaintiff can establish that this is true, he might be able to sue the ambulance company for Lara’s actions.